Over the weekend, Switzerland voted to be the first country in Europe to ban the construction of minarets on mosques. While one might accept the result as a simple example of religious xenophobia or fear, it has implications for those of us interested in nations and nationalism as well.

Traditionally, Swiss identity is tied to the country's mountainous geography and to the ability of its heroes— such as Wilhelm Tell—to repel invasion attempts. Yet, even as the nation's geography allowed for unfriendly outsiders to be kept at bay, so too the country prided itself on a diverse linguistic, cultural, and religious composition. The oft-stated pride in diversity grew from the historical evolution of Swiss nationalism—a story that is actually about ongoing and often heated debate concerning whether to celebrate diversity or to banish it. If the country was said to be inclusive, the claim was audible because a specific group hoped to obscure the anti-cosmopolitan rhetoric of those anxious to keep out those they found to be undesirable.

Briefly, the Swiss Confederation was founded in 1307. Initially, most patriotic organizations imagined the country as inclusive, focusing debate on the most effective way to improve life for the people of Switzerland. By the 1770s, however, an anti-cosmopolitan backlash developed against foreigners and foreign travel. From that point forward, inclusive and exclusive national identities competed for supremacy. Even when an "inclusive" vision of Swiss identity was dominant, below the surface Catholics and Protestants did not trust each other. Catholics were perpetually fearful that the government would undermine their cantons. Various factions debated everything from national holidays to the development of cultural institutions to the very foundation date of the Swiss nation. The entire story was one of constant and on-going debate—a saga that is brilliantly detailed by Oliver Zimmer in his book A Contested Nation: History, Memory, and Nationalism in Switzerland, 1761-1891 (Cambridge and New York: Cambridge University Press, 2003).

It seems entirely reasonable to understand the recent referendum result in light of the long-term dialogue about the meaning of being Swiss. The country has long been multicultural because it housed groups from various religious and linguistic backgrounds. Italian, German, and French speakers cohabitated, as did Protestants and Catholics. Sometimes all got along peacefully, other times conflict was rife. Today, more ethnic and religious groups are represented, but the old divisions remain and the perpetual debate about national identity persists. The Guardian's video-taped reactions by a number of down-beat Swiss citizens reflects this debate. Over the weekend, a plurality of voters adopted an exclusive view of Switzerland; those interviewed seek a more inclusive vision.

For those of us who study national identity, it is necessary to not only acknowledge the ongoing debate about identity, but to make it central to our understanding of nations and nationalism. Although all nations present a rhetoric of unity to the world, below a surface of equanimity always lies debate. Rather than trying to understand a single "imagined community," scholars need to explore the perpetual process of re-imagining the nation.
Posted by The Nationalism Project Blog at 5:04 PM No comments:

The story in Northern Ireland was a heartening one. Loyalists and Republicans sat down to discuss their differences. Yes, they were in separate rooms and at opposite ends of a hall, but they were sitting and talking. Eventually, the two sides agreed to the Good Friday Agreement and (although there were some significant bumps in the road) the general trend was toward reconciliation. The Provisional IRA surrendered its arms. Then some months later, the various Protestant paramilitary groups did the same. The Troubles appeared over. 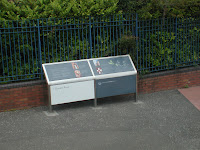 On the surface at least, the transformation was profound. At the bottom of the Shankill Road in Belfast, for example, tourist authorities installed an informational sign encouraging visitors to explore an area that I was once instructed by Northern Irish Tourist Board officials not to wander alone. Even the Shankill-area murals, once featuring men with AK-47s in intimidating poses, seemed to reflect an altogether new reality.

You can see what I mean. I took this first photo in September 2002—a UVF mural just off the Shankill. 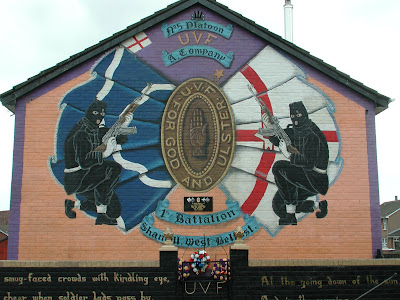 I shot this second photo in June 2009. While it certainly contains plenty of violence, the end of the narrative suggests a more peaceful future. Where once violence was justified, now it is time to talk. 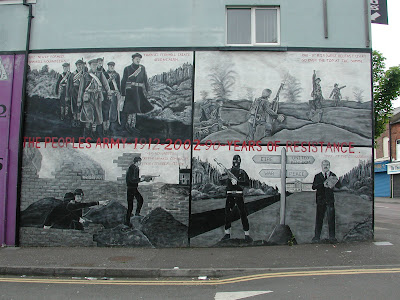 I do not want to imply that there were not hints of continued distrust, anger, and hostility. For example, in one Loyalist neighborhood, I found some rather less helpful and constructive things scrawled on the walls. 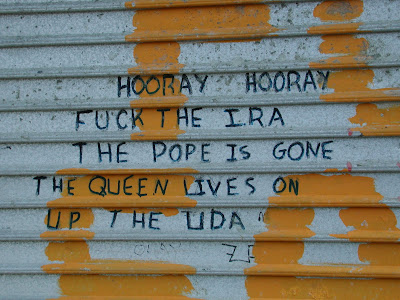 It takes time, I told myself. Sectarianism and nationalist strife does not just go away with a peace agreement. It is not easy to escape from a cycle of hate and retribution. Not easy to suddenly decide that a group you've detested for your whole life is "okay." Not possible to erase lessons learned at home: passed from father to son, mother to daughter. Indeed, men of violence, who gain a sense of power from their actions, are not likely to easily give up the confidence that comes from knowing how easy it is to take a life.

Unfortunately, the news from the North is not good. Even as I was departing the North last spring, a Catholic man was beaten to death in Coleraine, Co. Londonderry. This past September, police defused a 270kg bomb, apparently planted by the Real IRA in the South Armagh/North Louth border region. Today, the news from Northern Ireland includes the grim prognosis that "Republican terrorists 'widening attacks across Northern Ireland.'"

Naturally, Sein Fein denounces the violence, as does the DUP and virtually every other mainstream political organization. Those involved with the new wave of violence—the same group who brought you the Omagh Bombing—are acting outside of any larger political framework. They attack because they can and because it makes them feel powerful.

Mao Tse-Tung reportedly once said: "The guerrilla must move amongst the people as a fish swims in the sea." If you take away the people, the guerrilla has nowhere to move. The most effective way to fight terrorism is to remove popular support. Not only does a dearth of support make it difficult for terrorists to hide, it makes it impossible for them to replenish themselves by gaining new fighters. The great hope for Northern Ireland is that this new wave of violence will not draw in more supporters—as I am sure the Real IRA and their fans hope it will. The public must respond with disdain and with utter and complete intolerance for a return to the bad old days. The alternative is unthinkable.
Posted by The Nationalism Project Blog at 2:53 PM No comments:

Labour Pulls Off a Win

Despite predictions to the contrary, the Labour Party managed to win Glasgow North East by more than 8,200 votes. The victory smashed the hopes of a Scottish National Party anxious to upset 75 years of Labour dominance in NE Glasgow.

According to the Guardian, nobody expected an SNP win, but Labour's margin of victory was substantially larger than expected. One result is that some activists are asking "did the party almost entirely extinguish any talk of independence on the doorsteps of Glasgow North East?"

Naturally, others suggest that SNP inroads into Labour territory show a gradual erosion of Labour hegemony in Scotland. It may not happen tomorrow, they suggest, but the trend is toward Scottish independence.

A general election beckons.
Posted by The Nationalism Project Blog at 1:33 PM No comments:

For quite some time, most Chinese evidently imagined themselves to be relatively homogeneous and monocultural. Now, as China opens more and more to outsiders, interracial marriage and thus multiracial children are a greater and greater part of life.

Lou Jing is a young woman of mixed race. Her mother is from Shanghai, her father an African-American who (apparently) remains unaware that he fathered a child while in China. Hoping to become a TV newscaster, Jing became a contestant on an American Idol-style game show. Her skin color made her an immediate celebrity and the subject for some nasty racial attacks.

As National Public Radio puts it, the experience is forcing many Chinese to confront whether they imagine "race" to be a component of the national identity. The story is well worth a listen.
Posted by The Nationalism Project Blog at 11:26 PM No comments:

The Battle for Glasgow North

The battle for the Glasgow North parliamentary seat is shaping up to be quite interesting. The seat was a reliable "safe" seat for the Labour Party over the past 74-years. No more. The party's national troubles over the economy, foreign wars, and the scandal over the bad behavior of a sizable number of MPs this past spring leave Labour in a politically dangerous position.

As a result, the Scottish National Party, the Conservatives, the Liberal Democrats, and even the British National Party are all hoping to make a good showing. Evidently some polls show the BNP with a possible third place finish—an unheard of result in Scotland for a party that is usually seen as an English racist party.

John Harris provides a nice video report for The Guardian.
Posted by The Nationalism Project Blog at 11:19 PM No comments:

A group of Quebecois nationalists converged on a royal visit to Montreal, Canada today. You can find video coverage on the Guardian website.
Posted by The Nationalism Project Blog at 11:16 PM No comments: