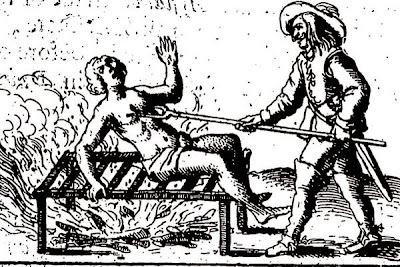 Irish national memory has long been haunted by the 1641 Rebellion and its aftermath when Oliver Cromwell cut a bloody swath through the country, reportedly slaughtering most of the inhabitants of Drogheda.

This past week, a new online archive of 8,000 depositions given by eye witnesses to the 1641 Rebellion went online. The archive includes 19,000 pages, spread over 31 volumes.

This collection is interesting from the standpoint of national memory, but is equally fascinating for the fact that it was launched by Mary McAleese, president of the Irish Republic, and Ian Paisley, former head of the Democratic Unionist Party (DUP) in Northern Ireland—a pairing that would have been completely unimaginable only a few years ago.

In a land haunted by memory, McAleese and Paisley were both anxious to address legacies of trauma. The Irish Independent reported:

[McAleese said] "They (the depositions) bring us deep into that dysfunctional and insane world where neighbour killed neighbour and where a ferociously harsh winter ensured that many more were to perish from the cold as they fled from the encircling violence."

"Let us hope that their voices and their suffering, far from driving us deeper into our sectarian bunkers, do the opposite and inspire us to keep on working to ensure an end forever to such suffering."

In giving his own reaction to the exhibition, Mr Paisley called on the public to "grasp the hand" of history. "Let us introduce these parts of our history in the right way to our children".

He added: "Trouble does not discriminate.

"Our fellow men and women of the 1600s knew trouble like, thankfully, none of us have ever experienced."

Quite a change from the bad old days of the Troubles.
Posted by The Nationalism Project Blog at 3:36 PM 1 comment:

The Guardian newspaper published an article today that links the far-right English Defence League (EDL) with the American Tea Party movement. The author, Mark Townsend, reports that the connection between the two groups is based on mutual opposition to the "Islamification" of the west.

Townsend notes that "With the Tea Party said to benefit from millions of dollars of funding from conservative foundations, experts warn an alliance between the EDL and extremist elements within the US movement could allow the English group to invest in wider recruitment and activism." This possibility is disturbing given that the EDL has already led a series of violent marches in English cities.

This trans-Atlantic links story is certainly of interest from the standpoint of American politics. With mid-term elections looming in less than a month, one wonders how far voters are willing to support a group that evidently allies itself with race-driven nationalist politics? Assuming that most people who will vote for Tea Party candidates are moderate or right-leaning (as most American voters arguably are), how much will these voters willingly swallow? How far are they willing to go?

It is also interesting from the perspective of nationalist politics. I have always been struck by the degree of connection, at least emotional connection, between nationalist groups in often very different countries and circumstances. There is, for example, an entire wall of murals in West Belfast dedicated to celebrating non-Irish nationalist movements. While one might posit a variety of explanations for such connections, I am not aware of any systematic study of them. Such a study might provide very interesting information about how national identities develop and change over time.

Finally, is it not a little bit curious that the Tea Party celebrates memory of an attack on British economic and political domination on the one hand while throwing its weight behind a far right British nationalist group on the other? The topic of political memory in America certainly deserves future study.
Posted by The Nationalism Project Blog at 9:01 PM No comments: